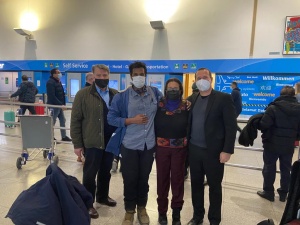 (CNN) An American teacher detained in Libya for more than six weeks has returned to the United States after the Libyan foreign minister personally intervened to expedite his release.

Fernando Espinoza, 29, landed Monday afternoon at New York’s JFK International Airport to a welcoming party that included his mother, Sara Espinoza, and executives from the nonprofit Richardson Center who negotiated his return

“I obviously made some mistakes, but multiple other parties made several mistakes as well, and it all just snowballed,” Fernando Espinoza told CNN from the car on the way to his hotel.

Espinoza’s arrival on US soil ended weeks of anguish for his mother, who said she was given very little information about where and why her son, a former US Navy submariner, was being held — or when he would be freed. Her work to secure his release dovetailed with mounting political tensions as Libya approached what was supposed to be its first presidential election in a decade.

“I’m just feeling happy and grateful that he’s back and that this didn’t last as long as it could have lasted,” Sara Espinoza said.

After CNN last week published a story about her search for answers, Libyan Deputy Foreign Minister Murad Hamaima rejected suggestions Espinoza had disappeared and said officials had planned to deport him sooner but couldn’t because of Covid protocols.

Espinoza told Libyan officials he wasn’t vaccinated against Covid-19, so they gave him his first dose and were waiting to give him a second one, Hamaima said.

The Libyan foreign minister intervened in the case “to preserve the strong Libyan-American relations,” according to a Libyan government statement.

Espinoza returned to the United States Monday via Cairo after showing proof of a negative PCR test, in line with Covid-19 entry rules for those countries.

A US State Department spokesperson said officials welcome reports of Espinoza’s release, but “due to privacy considerations, we are not going to go into specifics at this time.” 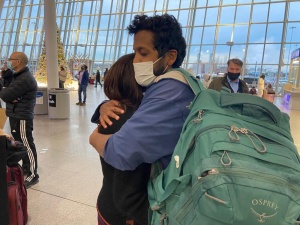 A weekend away leads to a long silence

Espinoza arrived in Libya in early October to start a new job teaching English at an international school in Tripoli. About a month later, he decided to travel farther afield and hired a driver to take him to the city of Sebha, a nine-hour drive south of Tripoli.

From Sebha, he planned to meet a local guide who would take him to Gaberoun oasis, a salty lake with an abandoned Bedouin village about 58 miles (93 kilometers) west of the city. But before he reached Sebha, he was detained, according to Libyan officials and text messages he sent his mother.

Espinoza was detained by security services for “violating the procedures and being in areas of tension without obtaining the permission,” according to a Libyan government statement.

He was released and continued his trip but was arrested on his return to Tripoli on November 9, according to friends, who received information from the school.

Espinoza had “violated his visa limitation,” broken his contract with the school and left without telling anybody where he was going, Hamaima, the deputy foreign minister, told CNN on Thursday. “I don’t think this is acceptable anywhere in the world,” Hamaima said.

Espinoza told CNN he was questioned about his presence in Libya, including why he’d left Tripoli to drive south.

“They were making a lot of false accusations (against me) … of espionage, covert ops, interfering with elections, things like that. So they definitely scared me,” he said.

The search for Fernando

At home in Miami, Sara Espinoza grew more and more worried about her son’s whereabouts.

She made contact with the closest US Embassy — in neighboring Tunisia — and consular officials there had their first call with her son in late November. They told Sara he was OK, had asked for his medication and wanted the chance to speak with her.

That chance came December 21, when mother and son got to speak for three minutes before he was told to end the call, she said. Fernando didn’t sound well, Sara said, and he told her: “Mostly what I do is sleep, cry and pray.”

When it seemed little progress was being made to secure his release, Sara Espinoza turned to the Richardson Center, a nonprofit established by former Congressman Bill Richardson with a strong track record in negotiating hostage and prisoner releases.

The group negotiated Espinoza’s release with the help of the Qatari government, which has close relations with Libya, and US consular officials, the group’s vice president and executive director, Mickey Bergman, told CNN.

“Every case is unique, of course,” he said. “In this case, we got involved early enough that the Libyan government really wanted to resolve the situation, so it was easier on that side.”

“We’re very grateful to the government of Libya for dealing with this so quickly and swiftly and without issue,” he added.

Trying to get him home amid political strife

Sara Espinoza had been racing to secure her son’s release as Libyans prepared to head to the polls December 24 for theirfirst presidential election since the 2011 revolution that left leader Moammar Gadhafi dead. But with just days to go, the election was postponed amid disagreement over how it should be run and whose names should be on the ballot.

It’s expected the vote will take place in January, but a date hasn’t been set.

Espinoza’s detention shows how vital is it for travelers to be aware of local laws and conditions, said the Richardson Center’s Bergman. The warning is especially true for former service members, he said.

“It’s important for Americans — even if they served previously in the military — that they’re very, very careful and abiding by local laws of the country they’re visiting, be it Libya, be it Iraq or anywhere really in the world, because the ability to protect them is limited,” he said.

Espinoza said his previous travel to developing countries had given him a false sense of security.

“I became complacent, that’s for sure. And I am a little bit too comfortable and too confident in my own ability to take care of myself,” he said. “Obviously, this negative event happened and I’m gonna switch things up (and) definitely be a little bit more cautious from now on.”

Before Espinoza’s detention, he and his mom had planned to spend New Year’s in Tunisia. Now, they’re staying closer to home for the holiday — in New York.