Former U.S. Ambassador to the U.N. Bill Richardson has left Myanmar after finishing a private humanitarian mission in which he sought to boost the Southeast Asian country’s efforts to fight the coronavirus pandemic and facilitate the delivery of aid.

BANGKOK (AP) — Former U.S. Ambassador to the U.N. Bill Richardson left Myanmar on Thursday after finishing a private humanitarian mission in which he sought to boost the Southeast Asian country’s efforts to fight the coronavirus pandemic and facilitate the delivery of aid.

“The main focus of my discussions was to identify specific ways to speed the delivery of COVID-19 vaccines from the COVAX facility to Myanmar and to help mitigate a possible fourth wave of COVID-19,” he said, according to a statement issued by his Richardson Center for Global Engagement.

COVAX is a U.N.-backed effort to even out global vaccine distribution by supplying doses to low- and middle-income countries. Myanmar is one of the poorest countries in Asia.

During his visit, Richardson met with the leader of Myanmar’s military government and other top officials, members of the foreign diplomatic corps and representatives of the United Nations and other international organizations, the statement said.

It said he recommended a range of specific humanitarian measures, mainly to facilitate the delivery of assistance to remote areas.

The situation has been worsened by armed conflict following the military’s seizure of power in February, when it ousted the elected government of Aung San Suu Kyi. Opposition to the takeover has grown into an incipient insurgency that some U.N. officials have warned could turn into a civil war.

Richardson, who has also served as secretary of energy and governor of New Mexico, “also encouraged Myanmar authorities to engage with the U.N. and ASEAN Special Envoys, suggesting creative solutions to break the current impasse,” the statement said. The Association of Southeast Asian Nations, or ASEAN, has sought to mediate a solution to the violent conflict, but Myanmar’s leaders have been uncooperative.

Richardson said he was able to secure the release from prison on Wednesday of a woman, Aye Moe, who used to work with his center. The military-installed government has arrested more than 9,700 people on political charges since it took power, though many have since been freed.

Richardson is known for his past efforts to gain the freedom of Americans detained in countries with which Washington has poor relations, such as North Korea. His visit had raised hopes that he might obtain the release of U.S. journalist Denny Fenster, who has been jailed for more than five months on political charges, but the statement did not mention his case.

The U.N.’s top humanitarian official in Myanmar, Andrew Kirkwood, said at the end of September that Myanmar’s “severe crisis” is the result of increasing communal strife, the military ouster of the country’s democratically elected government and the coronavirus pandemic, which had “a devastating third wave” of infections this past summer.

The per capita death rate in Myanmar was the worst in Southeast Asia during one week in July, when bodies were lined up outside overwhelmed crematoriums. Even before the surge, the country’s central health care system was collapsing as the military attacked and drove underground many medical workers who were early opponents of the February takeover.

As of Nov. 2, about 13.5 million of Myanmar’s roughly 55 million people had received at least one vaccination dose. 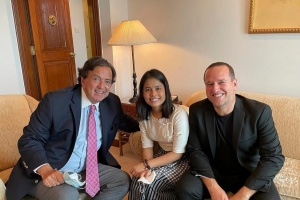