Mazher Mir talks to Steve Ross, a senior adviser and program director at the Richardson Center, about the plight of the Rohingya and how it affects Bangladesh

Governor Bill Richardson is a highly-regarded American diplomat with a long career of public service, including as a US congressman, US ambassador to the UN, secretary of energy, and governor of the state of New Mexico. He has a long history of engagement with both Myanmar and Bangladesh — he started the Bangladesh Caucus in Congress and his initiatives resulted in the pardon of an American women, Eliadah McCord, from a Bangladeshi prison in June 1996 after Prime Minister Sheikh Hasina’s Awami League won parliamentary elections earlier that month.

Last year, he was appointed to the Advisory Board on Rakhine by Aung San Suu Kyi, but resigned given the lack of space for constructive criticism over Myanmar’s handling of Rakhine. Nonetheless, Governor Richardson maintains a strong interest in addressing the Rohingya crisis and his organization, the Richardson Center for Global Engagement, has been deeply engaged for the past year-and-a-half.

He has been nominated for the Nobel Peace Prize three times and his organization, the Richardson Center for Global Engagement, was nominated last fall. I am here with Steve Ross, a senior advisor and program director at the Richardson Center, who has spent the last several years focused on Myanmar, Bangladesh, and the Rohingya, to discuss Rohingya refugee crisis.

Steve, you have just returned from Bangladesh. Tell me, how do you see the Rohingya refugee crisis evolving?

At the outset, it is important to recognize Bangladesh’s generosity and humanity in providing safe haven to Rohingya fleeing a brutal campaign of violence at the hands of the Myanmar military (the Tatmadaw), not just since October 2016, but also during previous influxes.

We must continue to be clear that the ultimate resolution to this crisis lies in Myanmar respecting and protecting the rights of the Rohingya, and more broadly, taking steps towards a more genuinely inclusive approach to politics and governance in Rakhine and across the country.

To date, though, Myanmar has done very little to give the Rohingya that would like to return home the confidence that it is safe to do so and that their fundamental rights will be respected; indeed, Rohingya remaining in Rakhine continue to face exceedingly difficult circumstances. The escalation in fighting between the Arakan Army and the Tatmadaw and parliamentary elections in late 2020 only complicates the dynamics in Rakhine further and reduces the likelihood of near-term progress. As a result, the Rohingya crisis will continue to be an undue burden on Bangladesh for some time.

The monsoon and cyclone seasons pose the most immediate challenge, but there are other socio-economic, environmental, and security challenges as well. 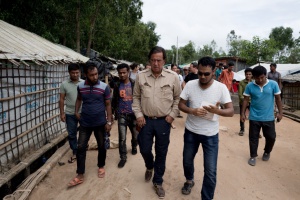 To address these challenges, Bangladesh and its partners must do more to alleviate adverse impacts on Bangladeshi host and affected communities and to give Rohingya hope for the future by ensuring their basic needs are met, providing adequate security, and devising constructive ways for Rohingya to spend their time, including by creating opportunities for Rohingya to influence the decision-making processes which most affect their lives.

Why can’t Myanmar be more isolated to put pressure on them? Can the US do more to resolve the Rohingya crisis?

It has been very difficult to apply effective pressure on Myanmar because the countries that have the political will to act have limited leverage over Myanmar and those that have leverage are unwilling to use it to resolve the Rohingya crisis. Many of Myanmar’s neighbours have either geostrategic or economic interests in the country and have not been willing to jeopardize these interests by being critical of Myanmar’s treatment of the Rohingya; there is, in other words, no credible threat against Myanmar’s interests that would compel it to alter its policy or behaviour on the Rohingya.

As long as these geo-strategic and economic interests — including by China and Russia, permanent members on the UN Security Council — afford Myanmar political and economic protection, it will be very difficult to apply the degree of pressure necessary to bring about changes in Myanmar’s treatment of the Rohingya (and other ethnic minorities).

However, there have also been missed opportunities to extract concessions from Myanmar to create improved conditions in Rakhine.

UNHCR and UNDP, for example, are set to renew their controversial MoU with Myanmar even though Myanmar has done very little to implement its obligations under the agreement over the past year; though Myanmar sees political value in the MoU, which gives the appearance of granting humanitarian access and cooperation with the UN, the negotiation of the renewal does not appear to have yielded anything meaningful from Myanmar. Opportunities like this are rare and must be recognized and seized upon.

Despite limited leverage over Myanmar, the US and others in the international community can do more. At the most basic level, it is important to keep this issue on the agenda. In the US specifically, Congress is likely to consider legislation in the coming months which would mandate punitive actions against Myanmar, such as further targeted sanctions on senior members and units of the Tatmadaw and restrict military-to-military engagement, as well as additional humanitarian assistance.

While Senate Majority Leader Mitch McConnell is likely to block the passage of this legislation, as he did last year under the misplaced belief that it will undermine Aung San Suu Kyi leadership and Myanmar’s “transition to democracy,” greater US leadership on the Rohingya would send an important signal to other stakeholders and could prompt others to take similar measures.

The issue of third-country resettlement is difficult because of negative global attitudes towards migrants and refugees; the desire of many Rohingya to return to Myanmar; and Bangladesh’s concern that third-country resettlement will reduce pressure on Myanmar, upset Bangladeshis that would like to emigrate, and be a pull factor for yet more Rohingya. Despite these challenges, it would be helpful from a humanitarian perspective if Bangladesh and third countries could reach agreement on the resettlement of particularly vulnerable populations.

After observing Myanmar’s government’s stand on the crisis do you think Aung San Suu Kyi is able to rectify the current situation and uphold human rights for which she was once praised?

First, let’s remember that it is Myanmar’s Tatmadaw that is primarily responsible for the terrible atrocities committed against the Rohingya. Having said that, while Aung San Suu Kyi has no direct control over the Tatmadaw, she is not as powerless as portrayed by some and she bears some complicity in defending the Tatmadaw and covering up their crimes. Moreover, she has failed to use her moral authority to set a tone of tolerance and inclusion; her political party, over which she exerts very tight control, has largely failed to use its majority in parliament to pass progressive laws and to amend regressive ones; and she wields significant influence through civilian ministries which oversee issues such as the design and implementation of citizenship processes and the publication of state media outlets (which continue to deny that atrocities occurred).

Those that have known Aung San Suu Kyi much longer than I have followed Myanmar politics believe her time in power has changed her, though the international community bears some responsibility for projecting on to her certain characteristics which she never embodied: She has a fondness for the Tatmadaw that her father founded, she holds condescending views of the non-Burmese, and she has an autocratic style of leadership that does not allow for constructive criticism.

For all of these reasons, I am sceptical that she has both the political will and the capacity to listen that are necessary to effectively address the plight of the Rohingya, the conflict in Rakhine, and the broader ethnic peace process.

Can Myanmar be allowed to get away with ethnic cleansing/genocide? What would the implications be for the world and especially minority communities around the world if that were allowed to happen?

Myanmar, with the support of its allies, is clearly trying to buy time so that it is neither held accountable for the atrocities committed against the Rohingya nor required to improve its treatment of the Rohingya (or other ethnic minorities). Myanmar has sought to portray itself as capable of investigating its own actions, but there is nothing to suggest Myanmar’s domestic institutions are capable of delivering the justice that victims of violence deserve. Given Bangladesh’s own history, it has rightly placed an emphasis on the importance of accountability, both to prevent Myanmar from “getting away with it” and to signal to others that such crimes cannot be committed with impunity.

That said, international justice mechanisms are slow and have relatively weak enforcement capabilities, so efforts to pursue justice must be complemented by sustained efforts to improve conditions in Rakhine for Rohingya and Rakhine (suffering from conflict between the Tatmadaw and the Arakan Army) and to create the conditions under which Rohingya would voluntarily choose to return to Myanmar from Bangladesh.

There is a risk that, given frustration over the lack of progress in Myanmar, the international community will focus on accountability because it is somewhat easier than compelling change in Rakhine, even if it is unlikely to bring about near-term improvements in Rohingya lives. Also critical — and largely missing from the conversation to date — is how Rohingya themselves perceive justice and accountability, an understanding of which should inform the ways that Bangladesh and others seek to address these issues with Myanmar and internationally.

What can Bangladesh do? Must we just accept that 1.2 million Rohingya are here to stay?

Bangladesh is in an extremely difficult position and, as noted earlier, the country and its people have done a tremendous global good by providing the Rohingya with refuge from Myanmar. Bangladesh first should continue its effective efforts to keep the Rohingya issue on the international agenda, which is the foundation for securing the international support needed to address the proximate and root causes of the crisis. 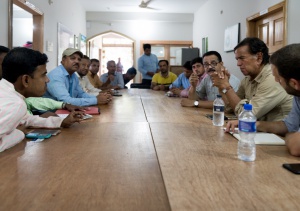 Bangladesh and the international community should also continue to push Myanmar and its allies to improve conditions in Rakhine and to lay the foundation for possible returns, emphasizing that economic development alone is not sufficient; opportunities to hasten the creation of conducive conditions in Rakhine must be recognized and seized upon.

Many Rohingya view the closure of the detainment camps in central Rakhine as a key confidence-building measure, provided that camp closure allows those displaced since 2012 to return to their homes or a site of their choosing and leads to access to basic services and livelihood opportunities.

In addition, and recognizing that this crisis will take at least several years to address, Bangladesh should be even more proactive in combating the mounting concerns over security and growing frustration in the camps by increasing the security presence, especially at night, and by providing Rohingya with constructive ways to spend their time, such as through learning and skills-building opportunities, that reduce hopelessness and the appeal of criminality or militancy.

Providing Rohingya in the camps with effective platforms to raise their concerns will also help to ameliorate some of their frustrations. Finally, Bangladesh should also work closely with partners in the international community, NGOs, and businesses to invest in the development of adversely affected host communities, ensuring that their concerns about the influx of the Rohingya are addressed and do not exacerbate an already tense and complex situation.

The key for Bangladesh and its international partners is devising a strategy that mitigates the near-term security and socio-economic risks and creates a foundation for a safe, dignified, voluntary, and sustainable return without undermining continued pressure on Myanmar to create the conditions for such a return.

Thank you, Steve, for sharing your insights. We do hope that you and the Richardson Center are able to work constructively with Bangladeshis, the Rohingya, and other key stakeholders to address this crisis.

Mazher Mir is Adviser to the ASEAN Council.

To Read the Interview on the Dhaka Tribune, click here.