Governor Bill Richardson and the Richardson Center are thrilled to announce that Navy veteran, Taylor Dudley, has been released from Russia today, January 12, 2023, at the Russia-Poland Bagrationovsk-Bezledy border crossing, and is currently with the Richardson Center team, on his way home, together with his mother Shelley.

Taylor has been held in Kaliningrad, Russia, since April of last year. Over the past year, our team travelled to Moscow and the region multiple times, liaising with our Russian counterparts and conduits. The negotiations and work to secure Taylor’s safe return were done discreetly and with engagement on the ground in both Moscow and Kaliningrad and with full support from Taylor’s family back in the United States.

“Taylor’s safe return would not have been possible without the help of Ara Abramyan and Vitaly Pruss, who turned every stone in this joint effort; and the help of Steve Menzies, who offered tremendous support to this effort,” said Governor Richardson. “It is significant that despite the current environment between our two countries, the Russian authorities did the right thing by releasing Taylor today. And as we celebrate Taylor’s safe return, we remain very concerned for Paul Whelan and committed to continue to work on his safe return, as we have been for the last four years, as well as other Americans.”

Governor Richardson and the Richardson Center have been working closely with Taylor’s family — his mother, Shelley; his brother, Louis; and his aunt, Jennifer — over the last six months, in the efforts that led to his release and safe return home.

Governor Richardson would also like to personally thank Jon Franks, Dr. Mohler and Anna Tunkel for their work in support of Taylor’s release.

The Richardson Center negotiates for the release of American prisoners and hostages held in hostile regimes or in countries with strained diplomatic relations. We work on behalf of the families and at no cost to them. The Richardson Center is greatly appreciative of our partners, including many private individuals and foundations who support and enable our work as a non-for-profit. 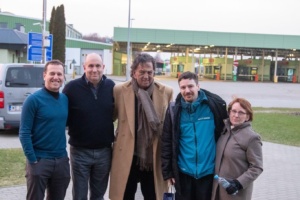