Governor Richardson and Mickey Bergman reflecting on a potential Trump-Kim meeting on the Washington Post:

At first, it felt like a diplomatic earthquake: President Trump and Kim Jong Un plan to meet. Indeed, it would be historic. But less than a day after the announcement, there were already conflicting statements on what obstacles would have to be overcome to make the meeting happen. And the key deal points of any potential breakthrough between the United States and the Democratic People’s Republic of Korea — better known to us simply as North Korea — haven’t changed in years: We want them to abandon nuclear weapons; they want us to pull our troops out of South Korea.

Neither side is likely to go that far. But Trump should meet with Kim, anyway. It might persuade both leaders that there is a valuable deal to be made. It would validate the groundwork laid by South Korean President Moon Jae-in before and after the PyeongChang Olympics, signaling to Kim that we stand behind our South Korean allies. It’s a chance to press for release of the three remaining American prisoners in North Korea, and it’s a chance to highlight an issue that has faded from the headlines — our decades-long effort to bring home the remains of our servicemembers who fell in the war. 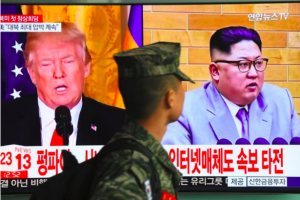 If he goes through with this, though, the president must treat it as the first step in a painstaking diplomatic project, not a self-aggrandizing photo op.

In just over a year as president, Trump has taken us, and our South Korean allies, on a diplomatic roller coaster ride: from the president’s August “fire and fury” remark, to his October “Little Rocket Man” tweet, to February’s announcement of new sanctions, to Thursday night’s bang-bang North Korean offer (delivered by South Korean envoys) and Trump’s acceptance.

He’d have us believe that he’s been playing 3-D chess all along, making moves no one else could even conceive of. But North Korean leaders have always craved the prestige that would come along with a bilateral face-to-face between their leader and an American president. Giving Kim one now would certainly be bold — give Trump credit for moxie — but it’s no guarantee that it will shift North Korea’s core negotiating stance.

Now that he’s on this path, the president has to avoid derailing the process with inflammatory statements and premature chest-thumping, something he doesn’t always resist. He needs a serious, experienced negotiating team that includes experts outside his inner circle. Trump fancies himself a negotiator nonpareil. But from firsthand experience, we can tell him that North Korea’s negotiators are well-briefed and highly attuned. If you use a wrong word in a verbal exchange, negotiations can take a major detour. Caution is essential at every step.

In the 1990s, when one of us, then-congressman Richardson, was an unofficial envoy, his U.S. delegation extended an offer of food aid to North Korea during one break in arms-control discussions as a gesture meant to encourage their counterparts to return to the talks. The North Koreans publicly rejected the aid, insisting that they didn’t need it, but then quietly accepted it, nonetheless. For show, they briefly reopened negotiations, but they weren’t serious. Nothing happened, and they blamed us for the impasse. A typical North Korean dodge.

In 2016, negotiating on behalf of Otto Warmbier’s family in Pyongyang, the other one of us, Mr. Bergman, received a flat “no” from the North Koreans on a proposal to bring Otto home during the official portion of a meeting. Minutes later, during an unofficial conversation, one of his counterparts casually commented: “There is a saying in my country: it takes 100 hacks to take down a tree.” The North Koreans negotiate with patience and deliberation, something Trump must take into account.

Optics aside, the contours of a U.S.-North Korea deal remain unchanged, and quite difficult. If he doesn’t want to end up looking like Kim outmaneuvered him, Trump must be prepared to slowly and carefully hammer out a realistic strategy with realistic aims, such as an eventual long-term agreement with strong verification standards and oversight. Before he can do that, here’s what he should consider:

First, he needs to come up with some new carrots and sticks. He’s used sanctions as a stick, and he’s already given up the best carrot he had, the promise of a meeting, head-of-state to head-of-state. Friday, White House press secretary Sarah Huckabee Sanders stated that Trump has made “zero concessions,” but agreeing to meet is a concession. Unless he plans to up the ante by inviting Kim out to Mar-a-Lago for golf in the spring, the president will need a new giveaway that he can dangle in front of Kim.

Second, Trump must understand that the North Koreans are not offering to denuclearize. They see their weapons capability as the only thing standing between them and regime change. They’re offering to halt their nuclear and missile programs, but not to disarm their existing arsenal — that’s been their position for years now, and Trump’s goal of reversing the Iran deal has only hardened North Korea’s stance: We can’t even trust an agreement the Americans have already signed, so giving up all our nukes wouldn’t be prudent.

Third, Trump must also be clear that what the North Koreans still want, as part of any deal, is the withdrawal of our roughly 38,000 troops from the Korean Peninsula. Hostilities may have ended in 1953, with the Korean War armistice, but the war isn’t technically over, and the North Koreans haven’t forgotten that more than 4 million Koreans died in that conflict. For us, North Korea is just one of many global flash points. For North Korea, we’re the flash point, and we remain the issue at the core of their security strategy.

The deal that’s on the table now, and has been for a while, is: That the North Koreans will halt their nuclear and missile programs and would allow implementation of a verification regime. In return, the United States would withdraw some military assets, ease economic restrictions and sign a treaty declaring a formal end to the war. Any deal would also probably have to include North Korean security guarantees vis a vis South Korea, China and Japan, in exchange for an increased flow of resources — food, fuel, technology — to North Korea from South Korea, China and Japan.

That isn’t everything Trump wants, but it’s likely as good as it gets.

And, crucially, it pulls us a step back from a potential shooting war. On Thursday, Sen. Lindsey Graham (R-S.C.) warned North Korean leaders that if they “try to play” Trump, “it will be the end of you — and your regime.” But everyone’s goal should be making a military option, which would produce a catastrophic outcome, an absolute last resort.

Trump’s routinely shoots from the hip. With the North Koreans, that’s a bad idea. He needs to be serious, worry more about what this means for American security and worry less about making himself look good.