Former New Mexico governor Bill Richardson was nominated last month by members of Congress. His nomination, which has not been previously reported, is for decades of work on behalf of hostages and prisoners held in several nations. The Norwegian Nobel Committee was asked to consider case histories including the late Otto Warmbier, an American college student released by North Korea in 2017 after 17 months, and returned to the United States with severe brain damage. He died days after returning to the United States.

“The innovative private diplomatic efforts by Governor Richardson and the Richardson Center have mitigated the risk of violent conflict, de-escalated tensions, opened critical back channels and made strides towards peace in conflicts around the world and in North Korea in particular,” Sen. Tom Udall (D-N.M.) and 23 current and former Democratic lawmakers wrote to the Nobel Peace Prize selection committee.

Richardson, a former Democratic congressman and U.S. ambassador to the United Nations, has made numerous trips to North Korea to seek release of Americans held there. In addition to Warmbier, the nominating letter says he also helped secure the release of two other Americans, journalist Laura Ling and Evan Hunziker.

“For as long as I have known Bill Richardson, I have known him to be a tough, relentless, and effective diplomat and advocate for peace and human rights around the world,” Udall said in a statement to The Washington Post.

Richardson and the Richardson Center for Global Engagement, his nonprofit organization, work independently from the U.S. or other governments, using what Richardson calls “informal diplomacy.” This is the fifth time Richardson has been recommended to the Nobel committee for work on behalf of hostages and international prisoners.

“No person or family should ever feel abandoned by their country when taken prisoner or hostage by hostile entities,” Richardson said in a statement to The Post. “I’ve got a lucky blue blazer for years I’ve worn into situations I didn’t know if I will make it out of. Doing this type of work is a challenge I love and will continue to do as long as I am able and as long as my blazer holds up.” 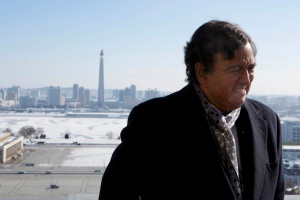